In October 2020, the Spanish government announced that it was considering eliminating the current VAT exemption for private health services. Using the same model as Contreras (2020)1, this article shows how the elimination of this exemption, contrary to what it might be expected, could result in an increase in Spanish public debt.

Over time, several countries have used tax incentives to promote access to private healthcare with the objectives of: i) reducing healthcare services prices and facilitating access; ii) mitigating pressures on public health systems, shortening waiting lists; iii) reducing public spending; iv) promoting access to a broader range of health care providers, and v) improving overall efficiency of the health sector by fostering competition within the industry. These fiscal incentives have taken the form of tax relief on the payment of health services or on health insurance fees (as was the case in Spain until 1999) and VAT exemptions (as is currently the case in Spain).

Regarding exemptions in VAT, there is a remarkable consensus in academia that tax breaks are problematic. This indirect and impersonal tax on consumption is intended to be borne by final consumers but, in the presence of exemptions, it applies to businesses. The exemption of a certain activity implies that service providers do not charge VAT to consumers, but neither they are allowed to deduct the VAT they bear in the purchase of their inputs. Therefore, a VAT exemption implies a tax burden for companies providing exempt services. Since this hidden tax creates inefficiency in allocation (lack of neutrality) and increases administrative complexity, the effectiveness of exemptions that supposedly promote equity or incentives is under review. In this article however, we focus on the budget impact.

Estimating the effect on public debt

When it comes to calculate the resulting net effect on public debt derived from the elimination of the VAT exemption in the private provision of health services, the joint impact of a number of effects must be considered. As shown in figure 1, there are a number of impacts that do not go in the same direction.

First, there would be an increase in public spending, due to greater use of the national health service.

Second, the elimination of the VAT exemption for health care provided by private companies would increase tax collection, since patients would have to pay a tax for these services (mechanical effect).

However, part of this theoretical increase in fiscal revenues would not be obtained, since a proportion of users would leave private health care to become users of the national health service, where tax collection would be not generated (behavior effect).

Fourth, after eliminating the VAT exemption, private health care providers would be allowed to deduct the VAT they pay on the acquisition of their inputs, which would cause a reduction in the tax collection.

Finally, as a second round effect, the fact that VAT on inputs becomes deductible would increase corporate profits and, therefore, the collection of corporate tax. 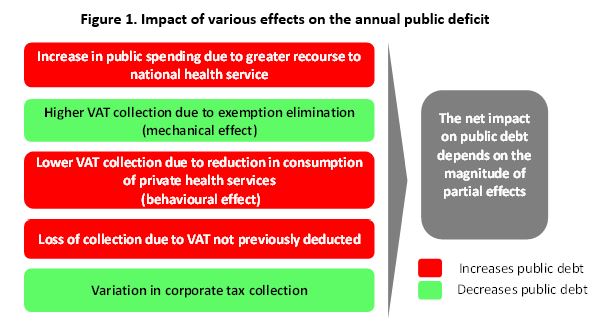 Consequently, the net variation in public debt, derived from this potential fiscal reform would depend on the relative magnitude of these five effects, which essentially depend on the value of six variables, as shown in figure 2. 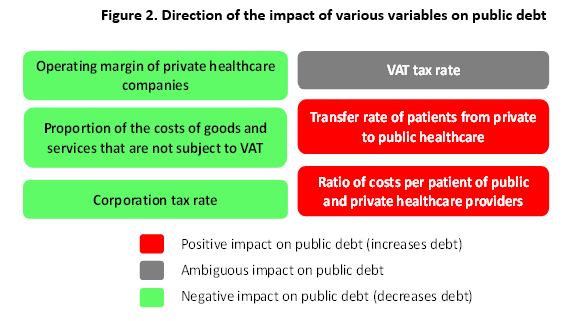 The most relevant factor impacting the variation in public debt, in case of eliminating the VAT exemption, is the increase in the number of new users that the national health service would have to attend. This basically depends on the elasticity value and the tax rate. Table 1 exhibits the results of various elasticities and tax rates in terms of percentage increase of public health users. 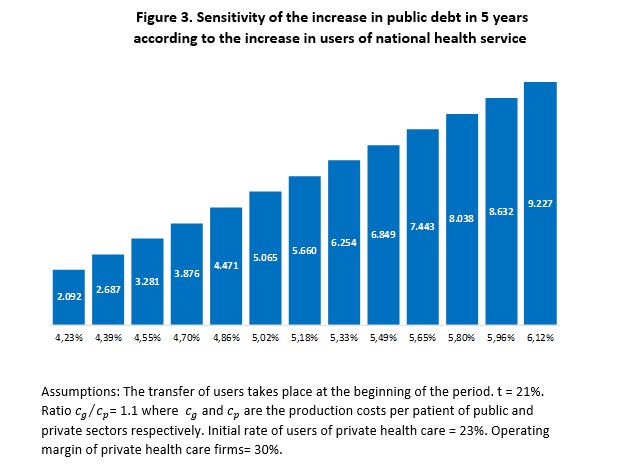 The increase in the number of patients cared for by public health care producing a neutral result in terms of public debt stands at 3.68%. Ceteris paribus, below this rate there would be a reduction in the public debt ratio.

When it comes to mitigating the impact on public debt, if the VAT exemption were to be eliminated, a relevant question is to what extent instead of a tax rate of 21% it would be better to establish a reduced rate (10%) or even a super-reduced rate (4%). As shown in figure 4, for transfer rate of users from private to public health care of 5.18%, the intermediate rate of 10% is the one that minimizes the increase in public debt. This curve is reminiscent of the Laffer curve, which relates tax revenues and tax rates. 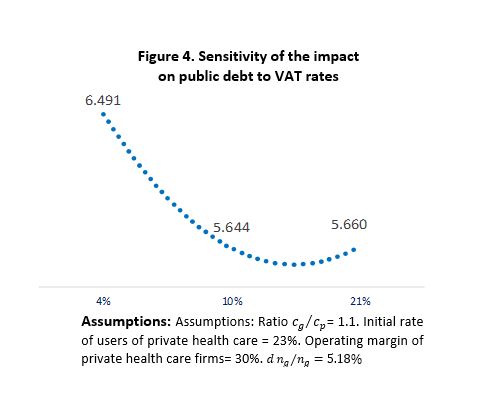 Our estimates indicate that, in terms of public debt, for any absolute value of elasticity that is less than -0.8236, the optimal tax rate is 21%; while for any value above -0.958 a tax rate of 4% would be preferable. See figure 5. 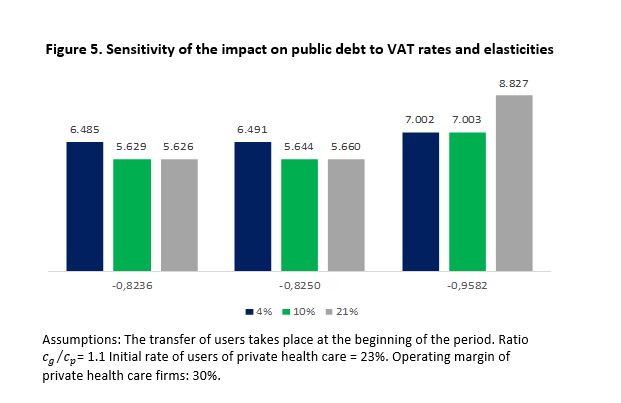 Finally, the other most relevant factor affecting the change in government debt derived from the elimination of the VAT exemption is the ratio of production costs per patient Cg ⁄ Cp. As expected, the more relative inefficient the public provision, the greater the impact on public debt. See figure 6 for the results of simulations with several production cost ratios and elasticities. 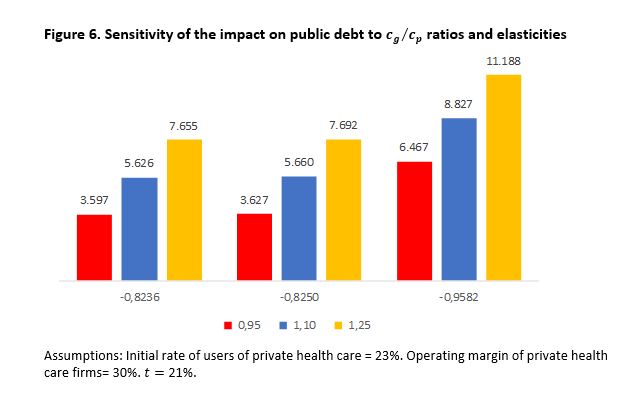