By the time this article was finalised, 3.8 million people had been infected by the Covid-19 virus in Spain and the pandemic had claimed 80.6 thousands lives according to government statistics (more than 100 thousands according to other estimates by INE and Carlos III Institute).

But the coronavirus pandemic it is not only a health crisis, it has also negatively impacted economic activity and it is proving to be a great challenge to public finances. At the end of 2019, Spain’s public debt-to-GDP ratio stood at 95.5%, only 5.2 percentage points below the historical peak that occurred during the Great Recession caused by the financial crisis. This figure means an increase of 59.7 percentage points since the end of 2007. In one single year, from March 2020, Spain’s public debt ratio has risen 30 percentage points to 125% of GDP. This ratio is expected to continue growing throughout 2021 given that the estimated general government deficit for 2021 is around 8% of GDP, with about 50% being a structural deficit.

Since the start of the Covid-19 pandemic, public debt to GDP ratio has not stop growing for a number of reasons (See Figure 1): 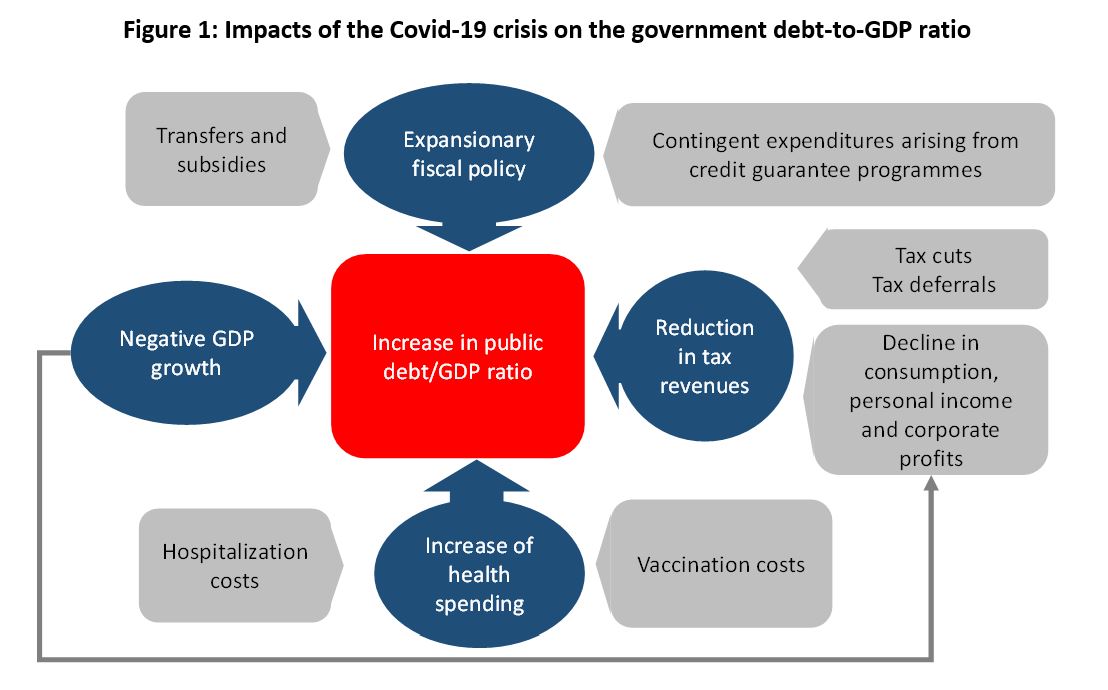 First, the crisis has resulted in a decline in GDP of 10.8%. Initially, the COVID-19 shock looked to be mostly a supply-side story. Lockdowns and social distancing measures resulted in a reduction in production, but in the face of temporary work stoppages and uncertainty about workers’ future incomes, a demand shock occurred subsequently. As GDP is in the denominator of the ratio, the contraction of domestic income translates into an arithmetic upward effect.

Second, the decline in personal income, corporate profits, consumption and economic transactions translated into a sharp drop in tax revenues of over 8% percentage points.

Third, fiscal policy has remained expansionary to mitigate the adverse economic impact of the pandemic on vulnerable households and firms, and to avoid persistent damage on production capacity. Budgetary measures in response to the Covid-19 crisis include transfers to firms and households, unemployment benefits, tax cuts and tax deferrals. The Bank of Spain estimates the impact of measures approved in 2020 on the budget balance at around 4.5 percentage points of GDP.

Fourth, the government established liquidity support programmes, providing credit guarantees to ensure that companies could find bank financing during the pandemic. These facilities, granted by the public agency ICO, do not entail an immediate increase in public expenditure. They are contingent liabilities that only have an impact on public accounts if and when they are called in. Bank of Spain has estimated this potential contingent risk for the general government deficit in 8.4% of GDP. We expect that, as early as 2021, a part of these guarantees will be called and have an impact on the government deficit.

Fifth, the pandemic has generated a sharp increase in health spending. Early in the pandemic, this impact was less noticeable, since the increase was offset by cancellations of non-COVID health care. However, a few weeks into the pandemic more health personnel had to be recruited, the use of telemedicine increased significantly and even new hospitals specialised in virus treatment had to be constructed. The amounts paid to laboratories for COVID-19 tests (PCR, serological and antigen tests) were also significant. Hospitalisation costs for patients infected with Covid-19 are proving to be high.

Finally, the costs associated with vaccination including the purchase, transportation, storage and inoculation of millions of vaccine doses contributed to increased public expenditure. However, this impact should be considered as second-tier compared to the above.

In this article, we try to show the extent to which it would have been better to spend more to speed up vaccination and shorten the time to herd immunity from a public finance perspective. We find that while the international scientific community was researching for safe and effective vaccines, governments should have taken steps to ensure that (once the formulae had been tested) there were no bottlenecks in the manufacture and supply of doses. On the contrary, experience has confirmed that there have been serious delays in vaccine supply in the European Union. Agreements should have been made with laboratories holding vaccine patents and production know-how, so that (i) they could have expanded their production capacity and (ii) other private laboratories could have made use of these rights to mass produce.

Our estimates indicate that a policy aimed at accelerating vaccinations would not only have saved many lives but would also have mitigated the deterioration of public finances. For the analysis, we use our paper (Contreras and Angulo, 2021), which start from the assumption that vaccination can be accelerated by allocating more resources to this task. In that work, we modeled the impact of shortening the period in which the virus infects (based on an average contagion rate), so that containment measures have to be kept active. Social distancing measures have a negative impact on economic activity and thus on tax revenues, unemployment benefits and hospitalisation costs. Figure 2 shows the estimated budgetary impacts for two different periods of the pandemic’s duration in the case of the Spanish economy.

According to these estimates, 44% of the reduction in the amount of public debt resulting from shortening the pandemic period would have come from savings in public spending to support temporarily unemployed workers, 37% from increased tax revenues and 19% from cost savings due to reduced hospitalisations.

The above estimates ignore the increase in public expenditure needed to reduce the period of the pandemic. To complete the analysis it is necessary to consider a relationship between the increase in vaccination expenditure and the anticipation of achieving herd immunity. We assume that, among other reasons, due to the proliferation of more contagious Covid-19 variants, and because vaccine protection is not complete, it will eventually be necessary to vaccinate the entire population to ensure social immunity. We take as a benchmark the minimum expenditure required to do so. One result of the paper by Contreras and Angulo (2021) is that there is an optimal level of spending on vaccination. Until this level is reached, increased tax revenues and savings in public spending offset the increased costs of accelerating vaccination. Beyond this optimal level, the net impact becomes negative, since the reduction in the pandemic period decreases as spending on vaccination increases, until it becomes marginal.

We find that this sweet spot is very close to a multiple of 3.25 times the benchmark level of vaccination spending. In conclusion, we estimate that increasing spending to this level would have mitigated the increase in Spain’s public debt by between 53.9 and 68.4 billion euros. See Figure 4.